skip to main | skip to sidebar

The Bronx, Bad Behaviour and Bottles

Three news items on successive days: (1) recalling how the pre-80s Bronx was a derelict no-go area, virtually a "war zone" where houses could not even be given away (they are now changing hands for millions); (2) yesterday's report from the Chief Inspector of Constabulary Sir Denis O'Connor saying the Police "did not regard anti-social behaviour as real crime", and (3) today's report that Dr Alasdair Forsyth, from the Glasgow Centre for the Study of Violence, is calling for city pubs to stop serving drinks in glasses and use plastic instead.

I can't be the only person to see a link here. The O'Connor report shows how important it is that the Police act on anti-social behaviour, which they "[do] not regard... as real crime and [are] slow to act [on]". The public don't agree: 45% (3.5m) of calls to the Police relate to it.

Today's call to ban glasses illustrates another, more insidious consequence of failing to Police properly - the suggestions that we all suffer in order to reduce the availability of 'weapons' to the tiny minority.

The O'Connor report says the Police need to 'reclaim the streets'. It is about time they did - and the Government need to back them to do so. The (many) laws against anti-social behaviour, public drunkenness etc. need to be enforced. It is a slippery slope towards the (pre-80s) Bronx - and deciding to ban beer glasses rather than crack down on drunkenness and brawling may be a step down that slope.
Posted by David Weston at 08:58 No comments:

Vince Cable got some easy cheers by railing against City "spivs and gamblers" - how comforting to be able to blame our ills on those nasty fat cats.

The banking bailout, on current figures, looks as if it will break even or even make the taxpayer a profit. Meanwhile banks and finance contribute a huge proportion of UK taxes - and now salaries and bonuses will be taxed at 50%.

What would you call those who run an organisation for years, borrowing £1 for every £4 they spend of shareholders' money, leaving others to pick up the tab in the future? The man in charge of the purse strings of this organisation for a decade was fond of using the word "prudence" in every speech. Some might say that they were nearer the "spivs and gamblers" end of the spectrum.
Posted by David Weston at 08:43 No comments:

The 'Coalition Document' issued today by the new UK Government has an intriguing line not so far commented on: "We have agreed to establish a commission to consider the ‘West Lothian question’."

Already voices have been heard in Scotland querying being ruled from England by Tories who were not voted for in Scotland. Welcome to our world! We in England are long used to being ruled by a Labour party voted on us by Scots.

I am intrigued at how this will be tackled: will it address the justice of the English getting the Government they vote for? Interesting times...
Posted by David Weston at 18:44 No comments:

They Deserve our Goodwill 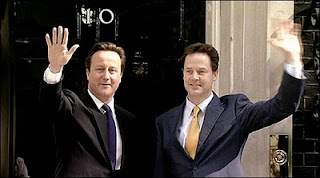 The last few amazing days have shown that that extraordinary thing, the "unwritten" British constitution, has worked. We now have what many said they wanted - politicians working together for the greater good.

Now is not the time for sniping and criticism from the wings - it is a time for us all to give the new Government room, and goodwill, to tackle the big issues. The massive deficit left by Labour must be sorted out, starting this morning.
Posted by David Weston at 09:54 No comments:

Controlling public expenditure - what the Government does with our hard-earned taxes - is rightly much debated. I don't see very much public discussion, though, about the last great redoubt of the "blank cheque": in the clutches of grandees of the Law, especially in their favoured retirement roles of running eponymous "Inquiries".
I mentioned Legg a while back but at under £2 million, Legg was a relative paragon of restraint; The Bristol Royal Infirmary Inquiry cost £14 million, the BSE Inquiry around £27 million. There can be only one winner, though, and as I open the (24 carat gold) envelope, I see that the Golden Blank Cheque award goes to: The Rt Hon Lord Saville.
Tony Blair first gave Lord Saville his book of blank cheques in January 1998, saying that the Saville enquiry should take a more thorough look at this matter of "urgent importance" than the first Inquiry into "Bloody Sunday" (by Lord Widgery), which reported 11 weeks after the event. Lord Saville has duly taken more than 11 weeks, more than 11 months - in fact, more than 11 years and counting.
The sheer surreal black comedy of Lord Saville's sense of "urgency" justifies our award today: on his Inquiry website, under "What's New" [sic], there is a Press Release headed "Final Report" [sic]. This explains that the final report is "in preparation" and that it is "not possible to give any firm estimate of when the report is likely to be finished". This latest news item is dated 12th August 2005. Yes, 2005. I am not making this up.
But why hurry, when the blank cheques are being filled out at £44,000 a DAY (yes, a DAY), mostly in fees to lawyers. £44,000 a day, for 12 years and 1 month (so far, until the end of last month): that makes £190,300,000. At that rate, if his Lordship can keep going another 8 months he can break the £200 million mark. That would indeed be a spectacular achievement, I am sure we all agree.
Yes, truly wonderful for the lawyers - but may I spoil their party with a question about how the budgets for these enquiries are set, or controlled? Someone is clearly counting the money as it is handed over to the various chambers, temples and inns, but has anyone thought of controlling it?
To put it another way, why are the cheques blank?
Posted by David Weston at 08:28 No comments:

Legg is a symptom of the problem, not the solution

I am sure Sir Thomas Legg is a decent and honourable man. But nevertheless he illustrates a wider problem, and is guilty of some of what he criticises in MPs.
All my working life has been spent in small, usually family-owned private companies. The mindset I am used to is one of acute cost-consciousness, of always looking for the least expensive way of achieving the required ends. Of counting every penny.
Sir Thomas moves in the lofty world of the "great and good", where such a penny-pinching focus would be regarded with distain; in his world, his deliberations are of an importance far removed from the vulgar mundanities of mere cost. The cost is a blank cheque to be signed by others.
The Legg report declares that "Proportionate limits on [MPs'] expenditure must be taken to have been in force".
But nobody should be above any thought of value, of what bill they are giving the public.
Is it too much to expect that, as Sir Thomas spent £1.16 million clawing back £1.12 million, he should have given a moment's thought himself to proportionality and restraint in the use of taxpayers' money?
Posted by David Weston at 11:43 No comments:

David Weston
My background is in travel and tourism. I am Chairman of the UK trade association for a £3.6 billion 'cottage industry', the B&B and Guest House sector (The Bed and Breakfast Association - see www.bandbassociation.org), and I also chair the Scottish B&B Association.